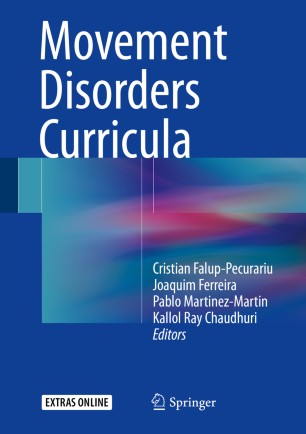 Divided into three parts, Movement Disorders Curricula provides an authoritative overview of this growing branch of neurology. The first part presents the basic elements of movement disorders, including descriptions of the anatomy and physiology of the basal ganglia. It also features sections on clinical trials for movement disorders, practical skills, and rating scales. The second and third part examine in detail hypokinetic and hyperkinetic movement disorders, respectively. Equipping readers with the practical and research skills needed in the movement disorders field, the book offers a valuable tool to help them prepare for board examinations on general neurology, as well as for fellowships in movement disorders.

Joaquim Ferreira is Professor of Neurology and Clinical Pharmacology at the Faculty of Medicine, University of Lisbon and Head of the Laboratory of Clinical Pharmacology and Therapeutics. He is also the head of CNS- Campus Neurológico Sénior in Portugal. He became interested in movement disorders during his medical degree and later undertook a Clinical Pharmacology fellowship with Prof. Olivier Rascol in Toulouse, France. He is currently the chair of the European Section of the International Parkinson and Movement Disorder Society. His major research interests are neuropharmacology, Parkinson’s disease, dystonia and Huntigton’s disease.

Pablo Martinez-Martin is Neurologist and Scientist Researcher of the Spanish Public Boards of Research at the National Center of Epidemiology, Carlos III Institute of Health (ISCIII) and Consortium for Biomedical Research in Neurodegenerative Diseases (CIBERNED – ISCIII), Madrid, Spain, since 2006. In the past he acted as Coordinator (2003-2006) and Scientific Director of the Research Unit for Alzheimer’s Disease at the Alzheimer Center Reina Sofia Foundation (2006-2014); Head of the Section of Neuroepidemiology at the National Center of Epidemiology, ISCIII, Madrid, Spain (2001-2006); Head of the Department of Neurology in the Hospital de Getafe (Madrid) (1991-2001) and of the Central Red Cross Hospital (Madrid) (1988-1991); and Head of Section of Neurology in the National Hospital for Infectious Diseases (1982-1988). Associated Professor of Neurology, Department of Health Sciences, School of Medicine, Complutense University, Madrid (1989-1993). He has received 14 awards in Neurosciences, Aging, and Parkinson’s disease. Member of several international Study Groups, Steering Committees for research, and Task Forces of the Movement Disorder Society and the European Federation of Neurological Societies. Chair of the Committee on Rating Scales Development of the International Parkinson and Movement Disorder Society since 2013. His main research lines are: Assessment instruments (rating scales, questionnaires), Patient-Reported Outcomes, particularly health-related quality of life; Outcomes research; Neurodegenerative diseases, particularly Parkinson’s and Alzheimer’s diseases; Dementia. Prof. Martinez-Martin has published over 380 articles in scientific journals, 99 chapters of book and 17 books as editor or co-editor. He has given 173 lectures as Invited Professor in teaching institutions, 178 talks in scientific events, and presented 422 reports to congresses. Chair and Convenor of 56 Scientific meetings and Teaching courses.

K Ray Chaudhuri is the Clinical Director of the National Parkinson Foundation International Centre of Excellence at King’s College  and Kings College Hospital London, Lead of the King’s Neuroscience Research and Development unit and Chairman of the Movement Disorders Society Non-motor Study Group at Denmark Hill Campus in London. Prof. Chaudhuri also sits on the Nervous Systems Committee of the UK Department of Health, National Institute of Health Research, and serves as a member of the Scientific Programme Committee of the International Parkinson’s and Movement Disorders Society. In addition, he serves as a member of clinical advisory groups to Parkinson’s UK and the European Parkinson’s Disease Association. Having published over300 papers and co-edited 4  books on PD and restless legs syndrome, Prof. Chaudhuri currently serves on the editorial board of numerous international journals including Basal Ganglia,  the Journal of Parkinson’s Disease and is the editor in chief of the newly launched Nature Parkinson’s Journal. He has particular expertise in non-motor aspects of PD focused on subtyping, sleep and pain.