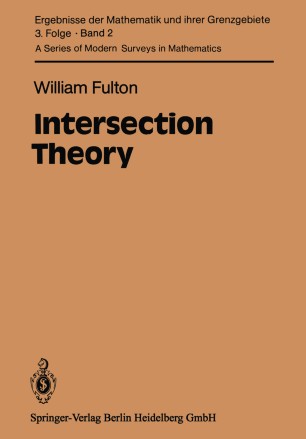 From the ancient origins of algebraic geometry in the solution of polynomial equations, through the triumphs of algebraic geometry during the last two cen­ turies, intersection theory has played a central role. Since its role in founda­ tional crises has been no less prominent, the lack of a complete modern treatise on intersection theory has been something of an embarrassment. The aim of this book is to develop the foundations of intersection theory, and to indicate the range of classical and modern applications. Although a comprehensive his­ tory of this vast subject is not attempted, we have tried to point out some of the striking early appearances of the ideas of intersection theory. Recent improvements in our understanding not only yield a stronger and more useful theory than previously available, but also make it possible to devel­ op the subject from the beginning with fewer prerequisites from algebra and algebraic geometry. It is hoped that the basic text can be read by one equipped with a first course in algebraic geometry, with occasional use of the two appen­ dices. Some of the examples, and a few of the later sections, require more spe­ cialized knowledge. The text is designed so that one who understands the con­ structions and grants the main theorems of the first six chapters can read other chapters separately. Frequent parenthetical references to previous sections are included for such readers. The summaries which begin each chapter should fa­ cilitate use as a reference.