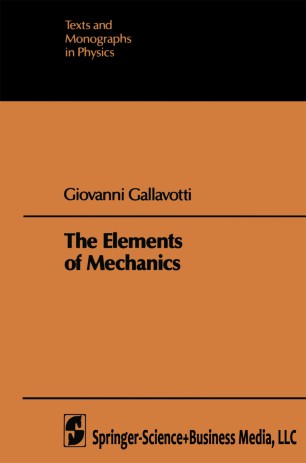 The Elements of Mechanics

The word "elements" in the title of this book does not convey the implica­ tion that its contents are "elementary" in the sense of "easy": it mainly means that no prerequisites are required, with the exception of some basic background in classical physics and calculus. It also signifies "devoted to the foundations". In fact, the arguments chosen are all very classical, and the formal or technical developments of this century are absent, as well as a detailed treatment of such problems as the theory of the planetary motions and other very concrete mechanical problems. This second meaning, however, is the result of the necessity of finishing this work in a reasonable amount of time rather than an a priori choice. Therefore a detailed review of the "few" results of ergodic theory, of the "many" results of statistical mechanics, of the classical theory of fields (elasticity and waves), and of quantum mechanics are also totally absent; they could constitute the subject of two additional volumes on mechanics. This book grew out of several courses on meccanica razionaie, i.e., essentially, theoretical mechanics, which I gave at the University of Rome during the years 1975-1978.