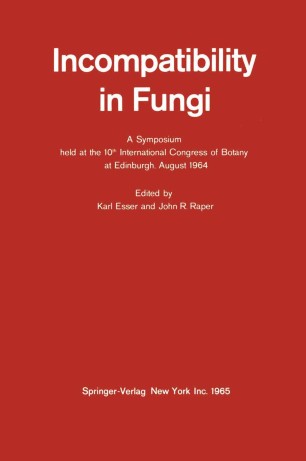 A Symposium held at the 10th International Congress of Botany at Edinburgh, August 1964

Sexual reproduction in the fungi is extensively regulated by incom­ patibility, which determines, in the absence of any morphological differ­ entiation, the pattern of mating among individual strains. Control of the interactions that comprise the sexual reproductive process resides in specific genetic factors, the incompatibility factors, which occur in several distinct systems in the various groups of fungi and which exert their control in two basically different ways. On the one hand, the system may play the same role as dioecy in higher organisms by restricting or preventing inbreeding among the members of the same race (homo genic incompatibility) and thus enhance outbreeding. On the other hand, the system may impose the opposite effect by restricting or preventing interbreeding between members of different races (heterogenic incompatibility) and thus promote inbreeding. In addition to these basic facts concerning the general biological signi­ ficance of incompatibility, important advances have been made in recent years, especially in the investigation of the genetics of incompatibility systems. Sufficient information concerning the genetic determination of incompatibility is now available to understand many phenomena which were very mysterious in the 1920's, when H. KNIEP, of Wiirzburg, Ger­ many, laid the groundwork for all subsequent study of incompatibility in the higher fungi. Furthermore, there is at present enough conceptual understanding of the physiological activity of the incompatibility-genes and of their action in morphogenetic processes to permit at least the formulation of plausible models of the operation of incompatibility systems.