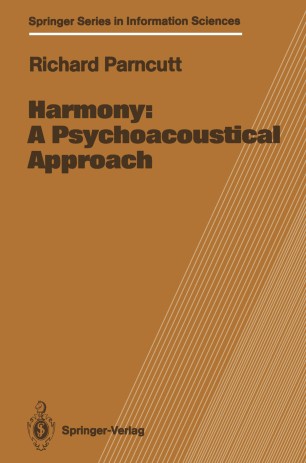 My first encounter with the theory of harmony was during my last year at school (1975). This fascinating system of rules crystallized the intuitive knowledge of harmony I had acquired from years of piano playing, and facilitated memorization, transcription, arrangement and composition. For the next five years, I studied music (piano) and science (Physics) at the Univer­ sity of Melbourne. This "strange combination" started me wondering about the origins of those music theory "rules". To what extent were they determined or influenced by physics? mathematics? physiology? conditioning? In 1981, the supervisor of my honours project in musical acoustics, Neville Fletcher, showed me an article entitled "Pitch, consonance, and harmony", by a certain Ernst Terhardt of the Technical University of Munich. By that stage, I had devoured a considerable amount of (largely unsatisfactory) material on the nature and origins of harmony, which enabled me to recognize the significance of Terhardt's article. But it was not until I arrived in Munich the following year (on Terhardt's invitation) that I began to appreciate the conse­ quences of his "psychoacoustical" approach for the theory of harmony. That is what this book is about. The book presents Terhardt's work against the broad context of music perception research, past and present. Music perception is a multidisciplinary mixture of physics, psychology and music. Where different theoretical ap­ proaches appear contradictory, I try to show instead that they complement and enrich one another.