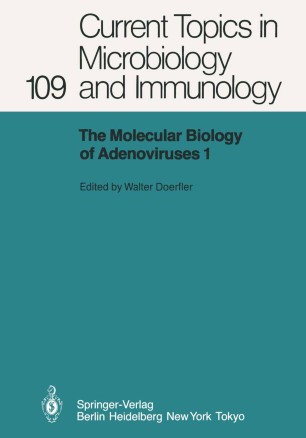 The Molecular Biology of Adenoviruses 1

A puzzling epidemiological problem was the driving force behind the discovery of human adenoviruses by Wallace Rowe and his colleagues 30 years ago. The de­ velopment of a plaque assay for poliomyelitis virus in 1953 led us to the threshold of quantitative virology, and in the same year the double-helical structure of DNA was discovered and became a cornerstone of mo­ lecular biology. The potential of adenoviruses as research tools in the molecular and cellular biology of eukaryotic cells was recognized as early as the late 1950s and early 1960s by several investigators. Structural and biochemical stu­ dies dominated the early years. In 1962, some of the adenoviruses were the first human viruses shown to be oncogenic in experimental animals. Thus adenovirology offered the investigator the entire gamut of host cell interactions, productive and abortive, as well as trans­ formed and tumor cell systems. The possibilities that adenoviruses afforded for the study of the molecular biology and genetics of eukaryotic cells were fully rea­ lized in the late 1960s and the 1970s.