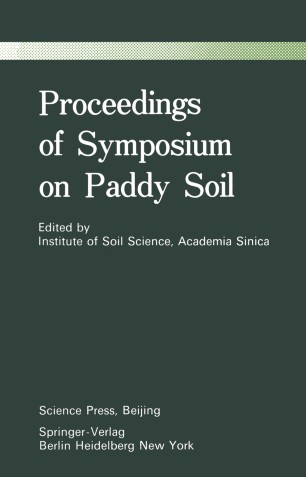 Proceedings of Symposium on Paddy Soils

China contributes a large part to rice production, one of the most important crops in the world. It is estimated that in China rice constitutes about half of the total food production, covering an area of about 30 % of \08 hectares of cultivated land of the whole country. Owing to the peculiar water regime, paddy soils possess quite different properties physically, chemically and biologically as compared with those of upland soils. Such properties have a conspicuous effect on fertility and management practice of paddy field. For the purpose of summing up the past work and opening up new prospects, a "Symposium on Paddy Soils" was organized under the auspices of Academia Sinica, held on October 19-24, 1980 in Nanjing, which was followed by a seven-day paddy soil excursion in the lower Changjiang Delta. In addition to 120 Chinese soil scientists, 56 guests coming from America, Asia, Europe and Oceania attended the symposium on invitation. A total of 110 papers were presented either orally or by poster. All these are collected and published in the present proceedings which we hope may be helpful to the scientific exchanges between soil scientists of China and other countries.