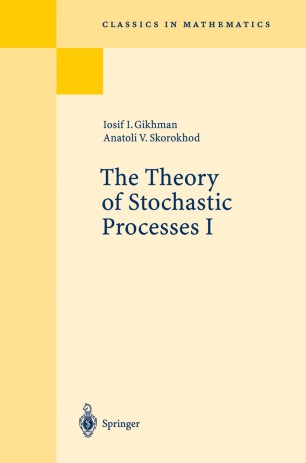 The Theory of Stochastic Processes I

"Gihman and Skorohod have done an excellent job of presenting the theory in its present state of rich imperfection."
D.W. Stroock in Bulletin of the American Mathematical Society, 1980

"To call this work encyclopedic would not give an accurate picture of its content and style. Some parts read like a textbook, but others are more technical and contain relatively new results. ... The exposition is robust and explicit, as one has come to expect of the Russian tradition of mathematical writing. The set when completed will be an invaluable source of information and reference in this ever-expanding field"
K.L. Chung in American Scientist, 1977

"..., the subject has grown enormously since 1953, and there will never be a true successor to Doob's book, but Gihman and Skorohod's three volumes will, I think, occupy a rather similar position as an invaluable tool of reference for all probability theorists. ... The dominant impression is of the authors' mastery of their material, and of their confident insight into its underlying structure. ..."
J.F.C. Kingman in Bulletin of the London Mathematical Society, 1977

Iosif Ilyich Gikhman was born on the 26th of May 1918 in the city of Uman, Ukraine. He studied in Kiev, graduating in 1939, then remained there to teach and do research under the supervision of N. Bogolyubov, defending a "candidate" thesis on the influence of random processes on dynamical systems in 1942 and a doctoral dissertation on Markov processes and mathematical statistics in 1955.

I.I. Gikhman is one of the founders of the theory of stochastic differential equations and also contributed significantly to mathematical statistics, limit theorems, multidimensional martingales, and stochastic control. He died in 1985, in Donetsk.

Anatoli Vladimirovich Skorokhod was born on September 10th, 1930 in the city Nikopol, Ukraine. He graduated from Kiev University in 1953, after which his graduate studies at Moscow University, were directed by E.B. Dynkin.

From 1956 to 1964 Anatoli Skorokhod was a professor of Kiev university. Threafter he worked at the Institute of Mathematics of the Ukrainian Academy of Science, but he has also, since 1993, been professor of Statistics and Probability at Michigan State University.