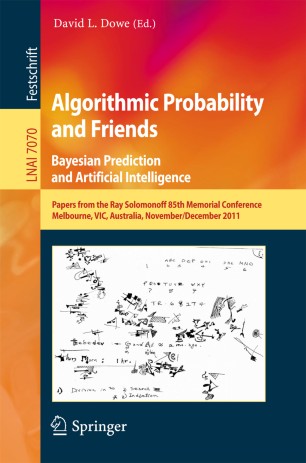 Algorithmic probability and friends: Proceedings of the Ray Solomonoff 85th memorial conference is a collection of original work and surveys. The Solomonoff 85th memorial conference was held at Monash University's Clayton campus in Melbourne, Australia as a tribute to pioneer, Ray Solomonoff (1926-2009), honouring his various pioneering works - most particularly, his revolutionary insight in the early 1960s that the universality of Universal Turing Machines (UTMs) could be used for universal Bayesian prediction and artificial intelligence (machine learning). This work continues to increasingly influence and under-pin statistics, econometrics, machine learning, data mining, inductive inference, search algorithms, data compression, theories of (general) intelligence and philosophy of science - and applications of these areas. Ray not only envisioned this as the path to genuine artificial intelligence, but also, still in the 1960s, anticipated stages of progress in machine intelligence which would ultimately lead to machines surpassing human intelligence. Ray warned of the need to anticipate and discuss the potential consequences - and dangers - sooner rather than later. Possibly foremostly, Ray Solomonoff was a fine, happy, frugal and adventurous human being of gentle resolve who managed to fund himself while electing to conduct so much of his paradigm-changing research outside of the university system. The volume contains 35 papers pertaining to the abovementioned topics in tribute to Ray Solomonoff and his legacy.