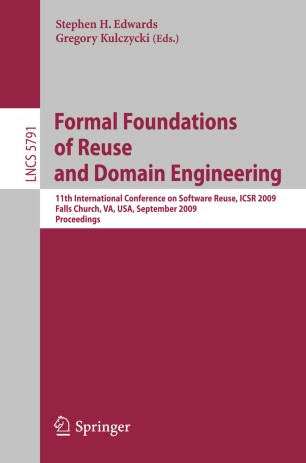 ICSR is the premier international conference in the ?eld of software reuse. The main goal of ICSR is to present the advances and improvements within the software reuse domain, as well as to promote interaction between researchers and practitioners. The 11th International Conference on Software Reuse (ICSR 2009) was held during September 27–30, 2009 in Falls Church, VA, USA. 2009 was the year that ICSR went back to its roots. The theme was “Formal Foundations of Reuse and Domain Engineering.” We explored the theory and formal foundations that underlie current reuse and domain engineering practice and looked at current advancements to get an idea of where the ?eld of reuse was headed. Manyof the papers in these proceedings directly re?ect that theme. The following workshops were held in conjunction with ICSR 2009: – Second Workshop on Knowledge Reuse (KREUSE 2009) – RESOLVE 2009: Software Veri?cation – the Cornerstone of Reuse – First International Workshop on Software Ecosystems – International Workshop on Software Reuse and Safety (RESAFE 2009) Aside from these workshops and the papers found here, the conference also included ?ve tutorials, eight tool demos, and a doctoral symposium. Links to all of this information and more can be found at the ICSR 11 conference website at icsr11.isase.org.