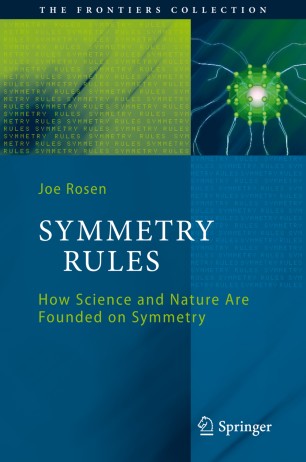 How Science and Nature are founded on Symmetry

When we use science to describe and understand the world around us, we are in essence grasping nature through symmetry. In fact, modern theoretical physics suggests that symmetry is a, if not the, foundational principle of nature. Emphasizing the concepts, this book leads the reader coherently and comprehensively into the fertile field of symmetry and its applications. Among the most important applications considered are the fundamental forces of nature and the Universe. It is shown that the Universe cannot possess exact symmetry, which is a principle of fundamental significance. Curie's principle - which states that the symmetry of the effect is at least that of the cause - features prominently. An introduction to group theory, the mathematical language of symmetry, is included. This book will convince all interested readers of the importance of symmetry in science. Furthermore, it will serve as valuable background reading for all students in the physical sciences.

A theoretical physicist, Joe Rosen was for many years a member of the School of Physics and Astronomy of Tel Aviv University and also served as chair of the Department of Physics and Astronomy of the University of Central Arkansas. He has authored or edited eleven books, and many of his publications have dealt with various aspects of symmetry in physics and in science. Now semi-retired from academe, Joe Rosen is involved in research, writing, and physics teaching as adjunct professor at universities and colleges in the Washington DC area.

"Symmetry Rules is a sophisticated monograph based on the special personal perspective of theoretical physicist Rosen … . The fundamental notion is that nature may be broken into isolated systems, and that nature may be understood as the sum of its parts. … The book includes a detailed presentation of group theory, which lends a distinctive view of nature. … This book belongs in good college libraries. Summing Up: Recommended. Upper-division undergraduate through professional collections." (K. L. Schick, CHOICE, Vol. 46 (01), September, 2008)