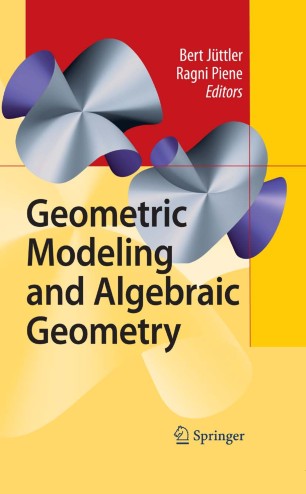 The two ?elds of Geometric Modeling and Algebraic Geometry, though closely - lated, are traditionally represented by two almost disjoint scienti?c communities. Both ?elds deal with objects de?ned by algebraic equations, but the objects are studied in different ways. While algebraic geometry has developed impressive - sults for understanding the theoretical nature of these objects, geometric modeling focuses on practical applications of virtual shapes de?ned by algebraic equations. Recently, however, interaction between the two ?elds has stimulated new research. For instance, algorithms for solving intersection problems have bene?ted from c- tributions from the algebraic side. The workshop series on Algebraic Geometry and Geometric Modeling (Vilnius 1 2 2002 , Nice 2004 ) and on Computational Methods for Algebraic Spline Surfaces 3 (Kefermarkt 2003 , Oslo 2005) have provided a forum for the interaction between the two ?elds. The present volume presents revised papers which have grown out of the 2005 Oslo workshop, which was aligned with the ?nal review of the European project GAIA II, entitled Intersection algorithms for geometry based IT-applications 4 using approximate algebraic methods (IST 2001-35512) .