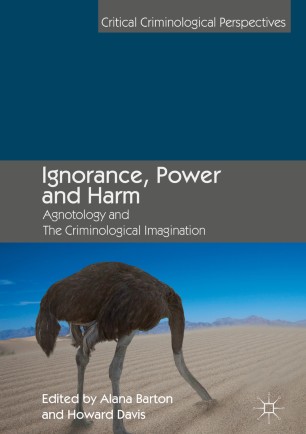 Agnotology and The Criminological Imagination

This book discusses the concept of 'agnosis' and its significance for criminology through a series of case studies, contributing to the expansion of the criminological imagination. Agnotology – the study of the cultural production of ignorance, has primarily been proposed as an analytical tool in the fields of science and medicine. However, this book argues that it has significant resonance for criminology and the social sciences given that ignorance is a crucial means through which public acceptance of serious and sometimes mass harms is achieved. The editors argue that this phenomenon requires a systematic inquiry into ignorance as an area of criminological study in its own right.

Through case studies on topics such as migrant detention, historical institutionalised child abuse, imprisonment, environmental harm and financial collapse, this book examines the construction of ignorance, and the power dynamics that facilitate and shape that construction in a range of different contexts. Furthermore, this book addresses the relationship between ignorance and the achievement of ‘manufactured consent’ to political and cultural hegemony, acquiescence in its harmful consequences and the deflection of responsibility for them.

Alana Barton is Reader in Criminology at Edge Hill University. She has previously worked at the University of Central Lancashire and Liverpool John Moores University. Alana is the author of Fragile Moralities and Dangerous Sexualities (Ashgate, 2005) and co-editor of Expanding the Criminological Imagination (Willan, 2007).