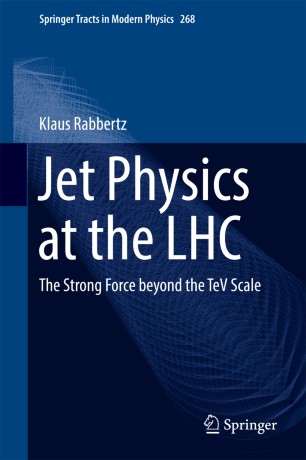 Jet Physics at the LHC

The Strong Force beyond the TeV Scale

This book reviews the latest experimental results on jet physics from proton-proton collisons at the LHC. Jets allow to determine the strong coupling constant over a wide range of energies up the highest ones possible so far, and to constrain the gluon parton distribution of the proton, both of which are important uncertainties on theory predictions in general and for the Higgs boson in particular.
A novel approach in this book is to categorize the examined quantities according to the types of absolute, ratio, or shape measurements and to explain in detail the advantages and differences. Including numerous illustrations and tables the physics message and impact of each observable is clearly elaborated.

Klaus Rabbertz obtained his Ph.D. in 1998 at the RWTH Aachen for research
performed within the H1 experiment at the electron-proton collider HERA. As a
CERN research fellow he worked within the OPAL experiment at the e+e- collider
LEP. Since 2002, he is a member of the CMS Collaboration at the LHC as senior
scientist for the University of Karlsruhe, now Karlsruhe Institute of Technology
(KIT). Initially, he spearheaded the worldwide deployment of the CMS software
and was the senior production manager for CMS at the German Tier 1 computing
site GridKa. Since 2007, he lead physics working groups for CMS and lectured on
jet physics. He is recognised as one of the most prominent researchers on QCD and
jets at the LHC.