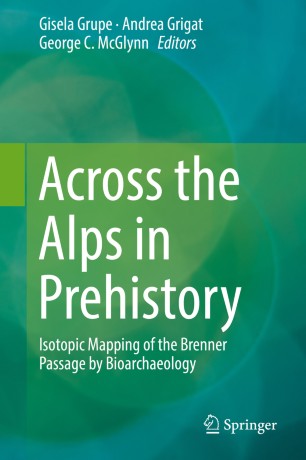 Across the Alps in Prehistory

Isotopic Mapping of the Brenner Passage by Bioarchaeology

At the heart of this book is the matter of how isotopic landscapes combined with data mining enriches insights on prehistoric migration and cultural transfer. Isotopic mapping is an indispensable tool for the assessment of mobility and trade in the past, but is limited by eco-geographic redundancies. An interdisciplinary research group focuses on the archaeological isotopic landscape of a reference region of outstanding importance, namely the transalpine migration route via the Brenner Pass which has been in use since the Mesolithic. Over the period of several cultural epochs, cremation was either the most common or exclusive burial custom practiced. For the first time, a systematic and large scale investigation of cremated remains was being conducted in the field of prehistoric migration research. 87Sr/86Sr, 208Pb/204Pb, 207Pb/204Pb, 206Pb/204Pb, 208Pb/207Pb, 206Pb/207Pb and – if applicable - also δ18O were measured in human and animal skeletal finds, an isotopic map was established, and innovative methods of data mining and similarity research have been applied to accomplish this novel approach to studying prehistoric migration and culture transfer. The book has interdisciplinary appeal and scholars working in bioarchaeology, physical anthropology and computer applications in life sciences will find it of particular interest.