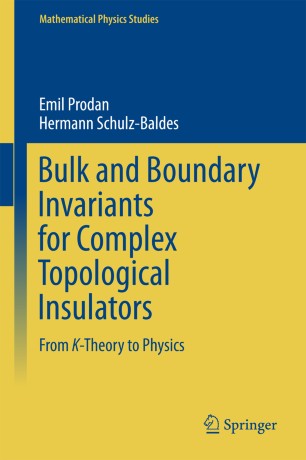 From K-Theory to Physics

This monograph offers an overview of rigorous results on fermionic topological insulators from the complex classes, namely, those without symmetries or with just a chiral symmetry. Particular focus is on the stability of the topological invariants in the presence of strong disorder, on the interplay between the bulk and boundary invariants and on their dependence on magnetic fields.
The first part presents motivating examples and the conjectures put forward by the physics community, together with a brief review of the experimental achievements. The second part develops an operator algebraic approach for the study of disordered topological insulators. This leads naturally to use analysis tools from K-theory and non-commutative geometry, such as cyclic cohomology, quantized calculus with Fredholm modules and index pairings. New results include a generalized Streda formula and a proof of the delocalized nature of surface states in topological insulators with non-trivial invariants. The concluding chapter connects the invariants to measurable quantities and thus presents a refined physical characterization of the complex topological insulators. This book is intended for advanced students in mathematical physics and researchers alike.

Hermann Schulz-Baldes has been professor at the Department of Mathematics of the University of Erlangen since 2004. Before this he received his PhD from the University of Toulouse under the supervision of Jean Bellissard, and he held several positions at TU Berlin and University of California at Irvine. His research focuses on the quantum Hall effect, quantum transport, and topological insulators.
Emil Prodan is full professor of physics at the Yeshiva University. Before this he received his PhD from the Rice University under the supervision of Peter Nordlander, and he has held several positions at University of California Santa Barbara and Princeton University. His research combines rigorous mathematical and computer simulations to study the physics of the condensed matter. He received the NSF CAREER award to support research on topological insulator.