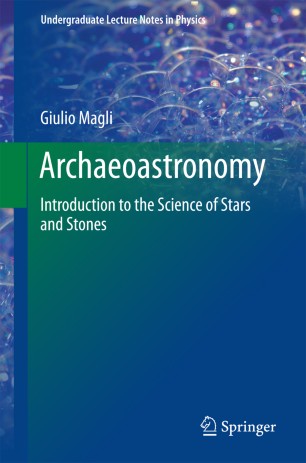 Introduction to the Science of Stars and Stones

This book provides the first complete, easy to read, up-to-date account of the fascinating discipline of archaeoastronomy, in which the relationship between ancient constructions and the sky is studied in order to gain a better understanding of the ideas of the architects of the past and of their religious and symbolic worlds. The book is divided into three sections, the first of which explores the past relations between astronomy and people, power, the afterworld, architecture, and landscape. The fundamentals of archaeoastronomy are then addressed in detail, with coverage of the celestial coordinates; the apparent motion of the Sun, Moon, stars, and planets; observation of celestial bodies at the horizon; the use of astronomical software in archaeoastronomy; and current methods for making and analyzing measurements. The final section reviews what archaeoastronomy can now tell us about the nature and purpose of such sites and structures as Stonehenge, the Pyramids of Giza, Chichen Itza, the Campus Martius, and the Valley of the Temples of Agrigento. In addition, a set of exercises is provided that can be performed using non-commercial free software, e.g., Google Earth or Stellarium, and will equip readers to conduct their own research. Readers will find the book an ideal introduction to what has become a wide-ranging multidisciplinary science.

Giulio Magli is an Italian astrophysicist/archaeoastronomer who works primarily on the relationship between the architecture of ancient cultures and the sky. After receiving his PhD in Mathematical Physics at the University of Milan, he initially conducted research in Relativistic Astrophysics but gradually moved toward Archaeoastronomy, with a special interest in the relationship between architecture, landscape, and the mathematical/astronomical lore of ancient cultures, especially among the Ancient Egyptians but also among the Incas and in the Mediterranean. He became full professor of Mathematical Physics at the Politecnico of Milan in 2005, and he is currently Professor there. Since 2009 he has taught the only official course on Archaeoastronomy ever established in an Italian University. His previous books include Mysteries and Discoveries of Archaeoastronomy (Springer 2009) and Architecture, Astronomy and Sacred Landscape in Ancient Egypt (Cambridge University Press 2013). He has taught the first massive open online course on Archaeoastronomy ever developed. The course is freely available (from February 2016) on the MOOC platform of the Politecnico of Milan.

“This book provides information on what kind of celestial motions can be followed with the naked eye and what kind of significance they might have had for the people who built these magnificent structures. In addition to the exposition we also get a glimpse of how archaeoastronomy is done and the reader is also provided with some tools and resources … to gain a better understanding of the nature of both archaeoastronomy and the historic sites mentioned in the book.” (AstroMadness.com, August, 2017)
Buy options