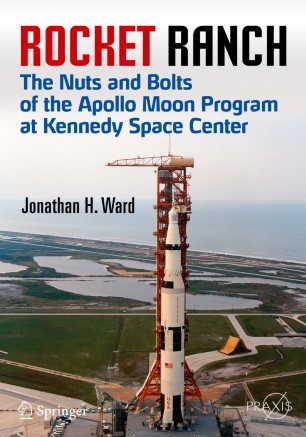 Jonathan Ward takes the reader deep into the facilities at Kennedy Space Center to describe NASA’s first computer systems used for spacecraft and rocket checkout and explain how tests and launches proceeded. Descriptions of early operations include a harrowing account of the heroic efforts of pad workers during the Apollo 1 fire. A companion to the author’s book Countdown to a Moon Launch: Preparing Apollo for Its Historic Journey, this explores every facet of the facilities that served as the base for the Apollo/Saturn missions. Hundreds of illustrations complement the firsthand accounts of more than 70 Apollo program managers and engineers.

The era of the Apollo/Saturn missions was perhaps the most exciting period in American space exploration history. Cape Canaveral and Kennedy Space Center were buzzing with activity. Thousands of workers came to town to build the facilities and launch the missions needed to put an American on the Moon before the end of the decade.

Work at KSC involved much more than just launching rockets. It was a place like none other on Earth. Technicians performed intricate operations, and hazards abounded everywhere, including lightning, fire, highly-toxic fuels, snakes, heat, explosives, LOX spills, and even plutonium. The reward for months of 7-day workweeks under intense pressure was witnessing a Saturn V at liftoff.

For anyone who ever wished they had worked at Kennedy Space Center during the Apollo era, this book is the next best thing. The only thing missing is the smell of rocket fuel in the morning.

American author Jonathan Ward spent several years of his childhood in Japan, but he considers the Virginia suburbs of Washington, D. C. to be his hometown. Although he has a wide variety of interests and has worked in many fields, space exploration is his lifelong passion. His joy of bringing the space program to life for the general public began in high school, when he served as a volunteer tour guide at the National Air and Space Museum during the Apollo 15 and 16 missions. He continues his public outreach today, as a Solar System Ambassador for the Jet Propulsion Laboratory, as a frequent speaker on space exploration topics to interest groups and at regional conferences and as an author for Springer-Praxis. Jonathan is also a frequent contributor to online space exploration forums.

Jonathan brings a unique perspective to his writing that marries a systems view of the topic, fascination with the technology, passion for space exploration and deep respect for the people who make it all happen. He holds an MS in Systems Management from the University of Denver and a BS in Psychology from Virginia Commonwealth University. He is professionally certified as an executive coach by the International Coach Federation, and serves on the adjunct faculty at the Center for Creative Leadership. His professional experience includes extensive work with leadership teams and several years with Boeing on the Space Station Freedom program.

Jonathan and his wife Jane now reside in Greensboro, North Carolina. He is fiercely proud of his two grown children and their families and he wishes they lived closer to him. He maintains a website to document his research on the Apollo era at Kennedy Space Center. He collects and restores artefacts from the Apollo era, including several control panels from the Firing Rooms. Jonathan also notes that he might possibly be the only current space author who has appeared on two GRAMMY-winning albums, which were recorded during his years as a Bass II section leader, soloist and eventually president of The Washington Chorus.

“Ward … makes the inner workings of the Apollo and Saturn space missions very understandable. … He does a fantastic job of showing the behind-the-scenes work that allowed the Apollo and Saturn space missions to take place. All readers interested in the history of space exploration will enjoy this work. Summing Up: Highly recommended. All readership levels.” (C. Charnaswskas-Jasionowicz, Choice, Vol. 53 (9), May, 2016)

“Rocket Ranch is an enjoyable overview of the Kennedy Space Center during the 1960s and a once-over-lightly account of the Moon landing program. … Contained here is the best account I have seen of the computing efforts at KSC and the operational aspects of the Apollo program. There is also a lengthy chapter on the Apollo 1 fire that many will find of interest. Ward relies on more than seventy interviews that he personally conducted … .” (Roger Launius's Blog, launiusr.wordpress.com, March, 2016)