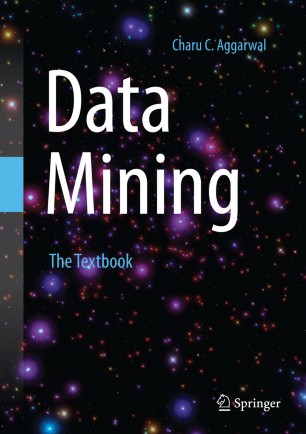 This textbook explores the different aspects of data mining from the fundamentals to the complex data types and their applications, capturing the wide diversity of problem domains for data mining issues. It goes beyond the traditional focus on data mining problems to introduce advanced data types such as text, time series, discrete sequences, spatial data, graph data, and social networks. Until now, no single book has addressed all these topics in a comprehensive and integrated way. The chapters of this book fall into one of three categories:

Appropriate for both introductory and advanced data mining courses, Data Mining: The Textbook balances mathematical details and intuition. It contains the necessary mathematical details for professors and researchers, but it is presented in a simple and intuitive style to improve accessibility for students and industrial practitioners (including those with a limited mathematical background). Numerous illustrations, examples, and exercises are included, with an emphasis on semantically interpretable examples.

Praise for Data Mining: The Textbook -

“As I read through this book, I have already decided to use it in my classes.  This is a book written by an outstanding researcher who has made fundamental contributions to data mining, in a way that is both accessible and up to date.  The book is complete with theory and practical use cases.  It’s a must-have for students and professors alike!" -- Qiang Yang, Chair of Computer Science and Engineering at Hong Kong University of Science and Technology

"This is the most amazing and comprehensive text book on data mining. It covers not only the fundamental problems, such as clustering, classification, outliers and frequent patterns, and different data types, including text, time series, sequences, spatial data and graphs, but also various applications, such as recommenders, Web, social network and privacy.  It is a great book for graduate students and researchers as well as practitioners." -- Philip S. Yu, UIC Distinguished Professor and Wexler Chair in Information Technology at University of Illinois at Chicago

Charu C. Aggarwal is a Distinguished Research Staff Member (DRSM) at the IBM T.J. Watson Research Center in Yorktown Heights, New York. He completed his B.S. from IIT Kanpur in 1993 and his Ph.D. from the Massachusetts Institute of Technology in 1996. He has worked extensively in the field of data mining. He has published more than 250 papers in refereed conferences and journals and authored over 80 patents. He is author or editor of 14 books, including the first comprehensive book on outlier analysis, which is written from a computer science point of view. Because of the commercial value of his patents, he has thrice been designated a Master Inventor at IBM.

He is a recipient of an IBM Corporate Award (2003) for his work on bio-terrorist threat detection in data streams, a recipient of the IBM Outstanding Innovation Award (2008) for his scientific contributions to privacy technology, a recipient of the IBM Outstanding Technical Achievement Award (2009) for his work on data streams, and a recipient of an IBM Research Division Award (2008) for his contributions to System S. He also received the EDBT 2014 Test of Time Award for his work on condensation-based privacy-preserving data mining. He has served as the general co-chair of the IEEE Big Data Conference, 2014. He served as an associate editor of the IEEE Transactions on Knowledge and Data Engineering from 2004 to 2008. He is an associate editor of the ACM Transactions on Knowledge Discovery from Data, an action editor of the Data Mining and Knowledge Discovery Journal, editor-in- chief of the ACM SIGKDD Explorations, and an associate editor of the Knowledge and Information Systems Journal. He serves on the advisory board of the Lecture Notes on Social Networks, a publication by Springer. He has served as the vice-president of the SIAM Activity Group on Data Mining, which is responsible for all data mining activities organized by SIAM, including their main data mining conference. He is a fellow of the SIAM, the ACM, and the IEEE for “contributions to knowledge discovery and data mining algorithms.”

“I can strongly recommend this book to any graduate students who want to learn the theoretical parts of the broad area of data mining. It offers enough material for several semesters of data mining or machine learning courses. Researchers and practitioners who want to survey the principles and concepts of current data mining topics and learn their theoretical perspective would benefit greatly from this book.” (Daijin Ko, Mathematical Reviews, May, 2017)

“Written by one of the most prodigious editors and authors in the data mining community, Data mining: the textbook is a comprehensive introduction to the fundamentals and applications of data mining. The recent drive in industry and academic toward data science and more specifically “big data” makes any well-written book on this topic a welcome addition to the bookshelves of experienced and aspiring data scientists… The writing style is excellent and the author managed to provide sufficient mathematical background in terms of formal proofs and notations, in order to make it self-contained and scientifically appealing to more theory-oriented readers.Covering more than 20 chapters and 700 pages, Aggarwal provides a unique textbook and reference to data mining, which I recommend to every reader working on or learning about data mining.” (Radu State, ACM Computing Reviews #CR143869)