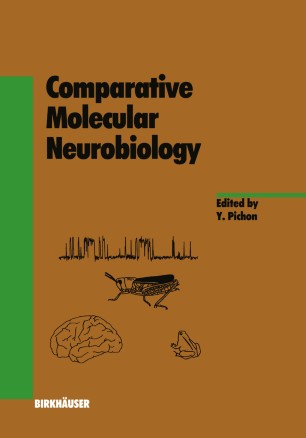 It is generally accepted that all living organisms present on earth derive from one single primordial cell born several billion years ago. One important step in the evolution occurred some 1. 5 billion years ago with the transition from small procaryote cells with relatively simple internal structures such as bacteria to larger and more compleX: eucaryotic cells such as those found in higher animals and plants. Large membrane proteins which enable the cells to communicate appeared early in evolution, and it is believed that the nerve membrane receptors and ionic channels which are observed today in both invertebrate and vertebrate species derive from a common ancestor. Basically, the three identified superfamilies, 1) ionotropic receptors (i. e. receptors containing an integral ionic channel), 2) metabotropic receptors (receptors coupled to G­ proteins) and 3) voltage-dependent ionic channels (Na+, K + and Ca2+ channels) were already well differentiated when vertebrates separated from invertebrate species. The large number of subtypes which are observed in each superfamily may be of more recent evolutionary origin. To understand how this happened, the best approach was to compare the sequences and the properties of the receptors and ionic channels in species sufficiently distant in the evolutionary tree. In the present volume, many of the best specialists in the field of comparative molecular neurobiology, several of them working on vertebrate and invertebrate species, have accepted to report their most recent findings.