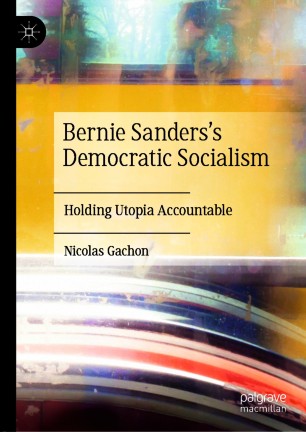 This book provides a framework for understanding and analyzing Bernie Sanders’s democratic socialism, its origins, its maturation, and its evolution between 1972, when Sanders ran for the Vermont gubernatorial election for the first time, and 2020, when he made his second presidential run. The core argument is that Bernie Sanders’s characteristic brand of socialism evolved from the mould of late 19th century utopian radicalism to radical demands for state and corporate accountability in the 21st century, turning into a social movement for reparative justice that rose to national prominence in the wake of the Great Recession in 2008 and of the Occupy Wall Street movement in 2011.
Nicolas Gachon is a specialist in US Politics and Political History at the Université Paul Valéry Montpellier 3, France. He has also held previous positions with the French Embassies in the United States and in Canada.

Nicolas Gachon is a specialist in US Politics and Political History at the Université Paul Valéry Montpellier 3, France. He has also held previous positions with the French Embassies in the United States and in Canada.

“Thanks to his in-depth knowledge of the history of left-wing movements in the United States, Nicolas Gachon has demonstrated how Bernie Sanders has managed to build his own political path, distinct from both European socialism and the centrism of the contemporary Democratic Party. In doing so, he successfully revived a long, and genuinely American, tradition of leaders fighting for the social and economic rights of every citizen of the United States.”—Françoise Coste, Professor of U.S. History and Politics at Université Toulouse Jean Jaurès, France, author of Reagan (2015), a prize-winning biography of the 40th president of the United States.

“Nicolas Gachon has written an engaging scholarly interpretation of Bernie Sanders’s view of democratic socialism. While Bernie Sanders's Democratic Socialism: Holding Utopia Accountable will not resolve the political debate surrounding Sanders’s radical vision, it offers a powerful point of departure for that discourse at a time when the US desperately needs a left alternative to the neoliberal embrace of both political parties.”

—William F. Grover, Faculty Fellow in the Honors College and Adjunct Professor of Political Science, Montana State University, USA. He is the author of The Unsustainable Presidency: Clinton, Bush, Obama and Beyond (2014), and the co-author (with Joseph G. Peschek) of Voices of Dissent: Critical Readings in American Politics (2012).