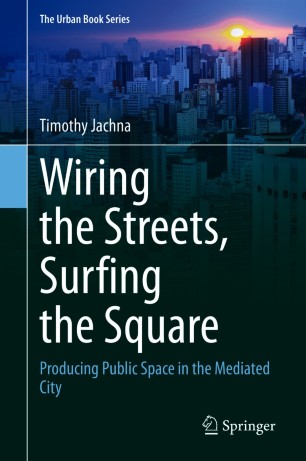 Wiring the Streets, Surfing the Square

This book investigates the production of public space in contemporary urban contexts as conditioned by the suffusion of urban life with digital technologies. A “social production of technology” approach is taken to frame the digitally-mediated city as a communal social and cultural project. Acknowledging the multivalent and shifting nature of public space and the heterogeneity of the urban actors who form it, the “agency” of these different actors in appropriating digital technologies takes center stage. The dynamics of negotiations between regimes of control and impulses towards freedom and experimentation, the entanglement of the spatial commons and the digital commons, changes in the notions of what constitutes membership in a public or counterpublic, and evolving relationships between the various individuals and groups who share and constitute public space, are all revealed in different actors’ appropriation of digital technologies in the formation of public spaces and the conducting of public life in cities.

The book is divided into two sections. Drawing on classic and contemporary scholars on public space, and on digital culture, Section I explores the implications of the convergence of these bodies of knowledge and lenses of critique and examination on the present urban condition, establishing a conceptual foundation upon which public space discourse is brought to bear on an interrogation of the “wired” or “mediated” city. Structured by the core concepts that underlie Hannah Arendt’s notion of agency in the constitution of the public sphere, Section II is devoted to discussing, and demonstrating through myriad concrete examples, how different “affordances” of digital technologies are implicated in the production of public space and in the interplay between urban governance and control, urban life and citizenship, and urban commodification. The topics in this book are of broad and current international relevance, and will appeal to scholars and students in architecture, urbanism, design, sociology, and digital culture.

Prof. Timothy Jachna is Dean of the College of Design, Architecture, Art, and Planning at the University of Cincinnati. He holds degrees from the University of Illinois at Chicago (BArch), the Architectural Association in London (AADipl), and RMIT University in Melbourne (PhD). He has previously held academic and professional posts in architecture, design and urbanism in Hong Kong, Berlin and Chicago, and has presented and published in disciplines as diverse as urban theory, tourism, digital culture, social innovation, semiotics, participatory design, art, architecture, planning, cybernetics, and human-computer interaction. His recent research and writing focus on psycho-sociological aspects of the planning, design, construction, and inhabitation of urban environments, the future of cities, and digital culture.