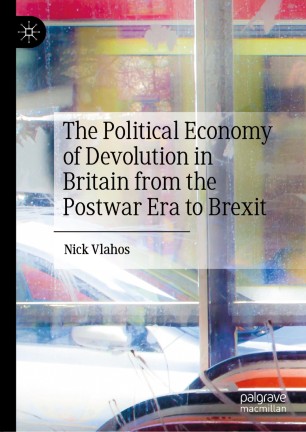 ‘Subnational policy and politics are on the move globally and this interdisciplinary contribution from Nick Vlahos is a majestic account. Rich in political economy insight and historical nuance, it reveals in new ways Britain’s complex and contradictory trajectory from depression to devolution, and beyond.’
–Martin Jones, Professor, Staffordshire University, UK
This book examines the political economy of devolution in Britain from the postwar period to the present. It situates devolution in Britain within an understanding of the partisan recalibration of political, economic and democratic scales (or levels) of the state. The author utilizes various explanatory tools to unpack complex social, economic, spatial and political phenomena across national, regional and local scales. The book further contributes to our conceptual understanding of decentralization as a broader, comparative, phenomenon. Particular emphasis is placed on examining why decentralization and devolution occur at particular points in time, which enables the investigation into how political and fiscal powers are (re)organized at different levels of the state.
Nick Vlahos is a researcher in the Centre for Deliberative Democracy and Global Governance at the University of Canberra, Australia.