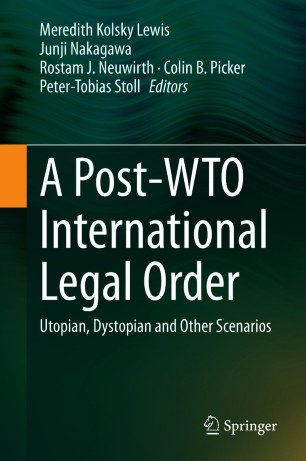 Utopian, Dystopian and Other Scenarios

This book provides readers with a unique opportunity to explore how the international economic legal order (IELO) may look in a post-WTO world. The substance of this book presupposes (whether correct or not) that the WTO either: (a) Stagnates into the foreseeable future (Doha withers, no new Rounds, at best minor amendments, little new jurisprudence, effective collapse of the DSB); or (b) Falls apart completely.
While neither is desirable, the book underlines that it must be conceded that neither is inconceivable. The collapse of the Soviet Union tells us that anything is possible (in 1986 no one foresaw the end of the Cold War - clearly it was a much more significant event than would be the case for the demise of the WTO and the current international economic legal order (IELO)). Similarly, just a year or two before Brexit or the election of US President Donald Trump, no one foresaw those two eventualities. Consequently, a worst-case scenario for the future of the WTO cannot be ignored – rather, it must be explored, as has been done in this book. Indeed, despite most IEL academics’ commitment to multilateralism and specifically to a vibrant and dynamic WTO, academics in the field are now beginning to seriously discuss what a post-WTO world could look like (and it was the project behind this book that first launched those discussions).  Accordingly, this examination of the post-WTO world will be of great value to practitioners, governmental and international officials and scholars in the IELO. This is particularly so in an era of increasingly rapid change, during which legal scholarship must also address the future if it wants to contribute creative solutions to the resolution and management of the many serious contemporary problems facing our field.