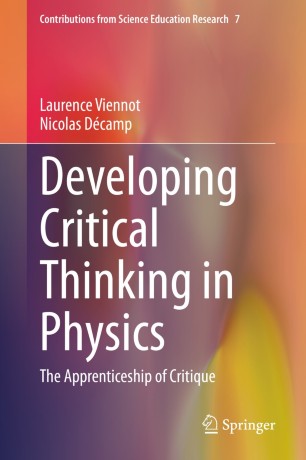 The Apprenticeship of Critique

This book promotes the effective implementation and development of critical analysis in physics. It focuses on explanatory texts concerning subjects typically dealt with in secondary or higher education and addressed in an academic or popular context. It highlights the general difficulties and obstacles inherent in teaching physics and shows how some tools can help to combine successful criticism and better understanding. The book examines the main reasons to call a text into question and looks at risk factors such as simplifications, story-like explanations and visual analogies. It takes inventory of the benefits and limits of critical analysis and discusses the complex links between conceptual mastery and critical attitude. The book ends by offering tools to activate critical thinking and ways for educators to guide students towards productive critical analysis.

Laurence Viennot is Professor Emeritus of Physics at the University of Paris, in the Laboratory of Matter and Complex Systems. After a few years of research in astrophysics, she turned to the didactics of physics, of which she is one of the pioneers at the international level. She was a member of the first board of European Science Education Research Association. Among her research themes, common reasoning in physics and the development and evaluation of teaching sequences in physics occupy a major place. She has received two international medals (IUPAPE and GIREP).  Her current research focuses on the development of critical thinking in physics students.

After having defended a thesis on the interstellar medium, worked on turbulence and taught for a few years in high school, Nicolas Décamp is now a lecturer at the Physics Department of the University of Paris.  He is in charge of the master's degree in physics teaching and conducts research at the André Revuz didactics laboratory, in particular on the links between the history of science and physics didactics and on the development of critical thinking in physics students.