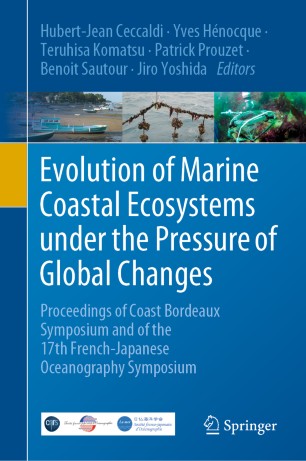 Evolution of Marine Coastal Ecosystems under the Pressure of Global Changes

Coastal and estuarine environments at the interface of terrestrial and marine areas are among the most productive in the world. However, since the beginning of the industrial era, these ecosystems have been subjected to strong anthropogenic pressures intensified from the second half of the 20th century, when there was a marked acceleration in the warming (climate change) of the continents, particularly at high latitudes. Coastal ecosystems are highly vulnerable to alteration of their physical, chemical and biological characteristics (marine intrusion, acidification of marine environments, changes in ecosystems, evolution and artificialization of the coastline, etc.).
In contact with heavily populated areas, these environments are often the receptacle of a lot of chemical and biological pollution sources that significantly diminish their resilience. In this context of accelerated evolution and degradation of these areas important for food security of many populations around the world, it is necessary to better identify the factors of pressure and understand, at different scales of observation, their effects and impacts on the biodiversity and on the socio-eco-systems, in order to determine the degree of vulnerability of these coastal ecosystems and the risks they face. A transdisciplinary and integrated approach is required to prevent risks. Within this framework, operational coastal oceanography occupies an important place but also the implementation of a true socio-eco-system approach in order to set up an environmentally friendly development.