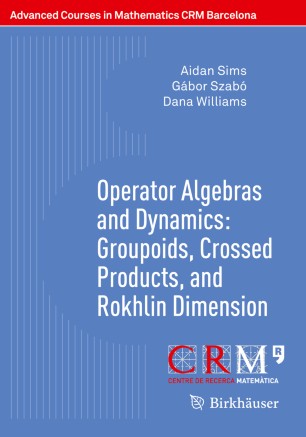 This book collects the notes of the lectures given at the Advanced Course on Crossed Products, Groupoids, and Rokhlin dimension, that took place at the Centre de Recerca Matemàtica (CRM) from March 13 to March 17, 2017. The notes consist of three series of lectures. The first one was given by Dana Williams (Dartmouth College), and served as an introduction to crossed products of C*-algebras and the study of their structure. The second series of lectures was delivered by Aidan Sims (Wollongong), who gave an overview of the theory of topological groupoids (as a model for groups and group actions) and groupoid C*-algebras, with particular emphasis on the case of étale groupoids. Finally, the last series was delivered by Gábor Szabó (Copenhagen), and consisted of an introduction to Rokhlin type properties (mostly centered around the work of Hirshberg, Winter and Zacharias) with hints to the more advanced theory related to groupoids.