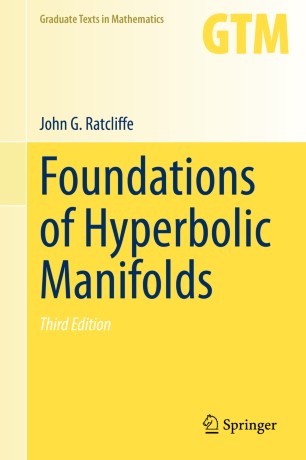 This book is an exposition of the theoretical foundations of hyperbolic manifolds. It is intended to be used both as a textbook and as a reference. This third edition greatly expands upon the second with an abundance of additional content, including a section dedicated to arithmetic hyperbolic groups. Over 40 new lemmas, theorems, and corollaries feature, along with more than 70 additional exercises. Color adds a new dimension to figures throughout.

The exposition is at the level of a second year graduate student with particular emphasis placed on readability and completeness of argument. After reading this book, the reader will have the necessary background to study the current research on hyperbolic manifolds.

From reviews of the second edition:

Designed to be useful as both textbook and a reference, this book renders a real service to the mathematical community by putting together the tools and prerequisites needed to enter the territory of Thurston’s formidable theory of hyperbolic 3-manifolds […] Every chapter is followed by historical notes, with attributions to the relevant literature, both of the originators of the idea present in the chapter and of modern presentation thereof. Victor V. Pambuccian, Zentralblatt MATH, Vol. 1106 (8), 2007

John G. Ratcliffe is Professor of Mathematics at Vanderbilt University. His research interests range from low-dimensional topology and hyperbolic manifolds to cosmology.