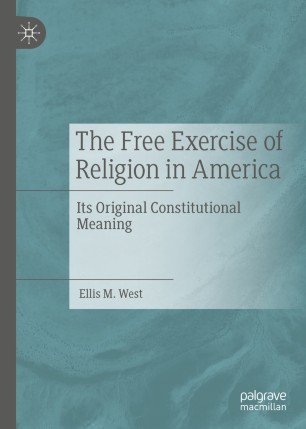 The Free Exercise of Religion in America

Ellis M. West is Emeritus Professor of Political Science at the University of Richmond, USA. His scholarship focuses on the religion clauses of the First Amendment, as they were originally understood and have been interpreted by the US Supreme Court.

“THE FREE EXERCISE OF RELIGION IN AMERICA: ITS ORIGINAL CONSTITUTIONAL MEANING is a tour de force. It will surely become the book from which future debate over the historical origins of the religion clauses, particularly the Free Exercise clause, begins. … THE FREE EXERCISE OF RELIGION IN AMERICA lands in our scholarly midst at a time of continuing political and legal struggles over the meaning of religious liberty.” (Andrew R. Murphy, Law and Politics Book Review, October, 2019)
Buy options