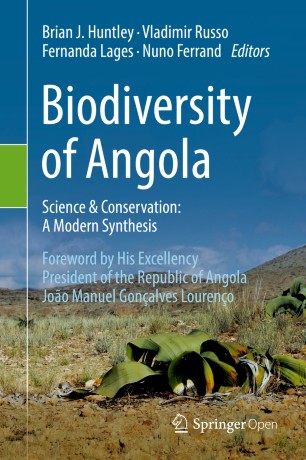 This open access multi-authored book presents a 'state of the science' synthesis of knowledge on the biodiversity of Angola, based on sources in peer-reviewed journals, in books and where appropriate, unpublished official reports. The book identifies Angola as one of the most biologically diverse countries in Africa, but notes that its fauna, flora, habitats and the processes that drive the dynamics of its ecosystems are still very poorly researched and documented.

This 'state of the science' synthesis is for the use of all students of Angola's biodiversity, and for those responsible for the planning, development and sustainable management of the country's living resources.  The volume brings together the results of expeditions and research undertaken in Angola since the late eighteenth century, with emphasis on work conducted in the four decades since Angola's independence in 1975. The individual chapters have been written by leaders in their fields, and reviewed by peers familiar with the region.

Brian J Huntley is an internationally respected conservationist with over 50 years of research and management experience in many African countries and the Sub-Antarctic. His involvement with Angola dates from the 1970s and has continued ever since. Following retirement as CEO of the South African National Biodiversity Institute, he is currently an independent consultant on conservation projects in several African countries. He is a Research Associate at the Centre for Invasion Biology, Stellenbosch University and an Emeritus Professor at the University of Cape Town.

Fernanda Lages is a biologist who has worked for more than 30 years as a teacher at the Faculty of Sciences, Universidade Agostinho Neto, in Luanda, and as a researcher at the National Center for Plant Genetic Resources. She moved to Lubango in 2007, where she became responsible for the biological collections of the former Institute of Scientific Research of Angola. She is currently involved in several projects related to the study of Angolan fauna and flora. Her priority is the documentation, development and dissemination of the collections and promotion of their value as scientific and educational resources.

Nuno Ferrand is a biologist and professor of genetics and evolution at the Faculty of Sciences, University of Porto, Portugal, and at the University of Johannesburg, South Africa, and has published over 150 papers in prestigious SCI international journals. He is the Director of CIBIO/InBIO, the Research Center in Biodiversity and Genetic Resources, a national key-lab in the biological sciences, and also the Director of the Natural History and Science Museum at the University of Porto. In addition, he was recently awarded by UNESCO with the Chair Life on Land, which corresponds to a network of TwinLabs aimed at developing partnerships in research, advanced training and capacity building with institutions located in Angola, Mozambique, Namibia, South Africa, Zimbabwe and the Cape Verdes. Finally, he also dedicates a considerable part of his life to advise national governmental and non-governmental conservation bodies, as well as involving industry and business in the long-term conservation of biological diversity.