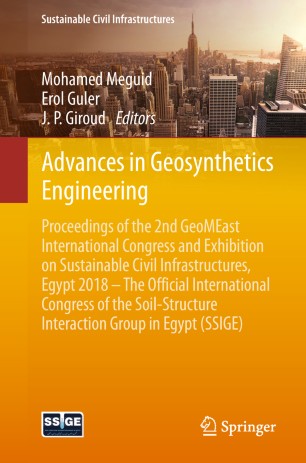 This volume contains contributions on advances in geosynthetics engineering. Soil reinforcement is a very useful technique to construct several cost-effective soil structures in an environmentally friendly and sustainable manner. The most commonly used reinforcement materials are galvanised steel strips, geosynthetics in the form of woven geotextiles, geogrids and geocomposites, and fibres from natural and waste products. In recent years, there have been advances in the area of soil reinforcement, especially in the utilization of the technique in field projects. The researchers have also been working to understand the behaviour of reinforced soil considering the field challenges of reinforced soil structures. The volume is based on the best contributions to the 2nd GeoMEast International Congress and Exhibition on Sustainable Civil Infrastructures, Egypt 2018 – The official international congress of the Soil-Structure Interaction Group in Egypt (SSIGE).

Dr. Meguid received his Ph.D. degrees in Geotechnical Engineering from the University of Western Ontario. He spent one year as a postdoctoral fellow at Queen’s University before accepting an industrial position as a project manager for a prominent consulting company in Canada. In 2004, Dr. Meguid joined McGill University as an Assistant Professor of Civil Engineering. During his tenure at McGill, he held numerous administrative positions, including Associate Chair of the Civil Engineering Department between 2010 and 2012 and Associate Dean of the Faculty of Engineering between 2012 and 2016.
The teaching interests of Dr. Meguid include numerical methods in geomechnics, analysis and design of subsurface structures and sustainable geotechnique. His research interests are in the area of physical and numerical modeling of soil-structure interaction problems with a focus on subsurface structures. His more than 80 technical publications in the past ten years examined the long-term performance of tunnels and other buried structures. He has been consulted in several national and international projects. Dr. Meguid is a member of the Trenchless Engineering International Research Advisory Committee He received several teaching and research awards and his graduate students have been recognized with various honors from professional societies in North America.
Dr Erol Guler is a full professor of geotechnical engineering at Bogazici University, Istanbul, Turkey since 1989. He acted as the Director of Environmental Sciences Institute of Bogazici University between 1996 and 1999 and as the Chairman of the Civil Engineering Department between 2004 and 2010. He was a visiting Fulbright Professor at the University of Maryland between 1989 and 1991. Prof. Guler is the leading geosynthetic scientist in Turkey, having been an IGS Member since 1989. He founded the IGS Turkish Chapter in 2001 and served as its president until 2005, and was reelected as President again in 2011. He was the organizer for the first two national geosynthetic conferences in 2004 and 2006 and is currently the chairman of the 7th congress which will be held in 2017. He was also of the Chairman of the 2016 European Regional Conference of IGS, EuroGeo6. Prof. Guler has been a member of the International Standards Organization (ISO) Technical committee on geosynthetics as a representative of the Turkish Standards Institute since 2002. He is currently the Convener of the WG2 of ISO/TC221 (Technical Committee on geosynthetics) and is also the Convener of the WG2 of CEN-TC189 (European Committee for Standardization’s Technical Committee on geosynthetics). Prof. Guler is currently an international member of the USA TRB Committee on Geosynthetics. Prof. Guler’s research has focused mainly on geosynthetic reinforced walls and specifically he conducted research on the use of marginal soils in such structures and their behavior under earthquake loading conditions. His research work includes numerical studies as well as shaking table tests and full scale tests. Prof. Guler has over one hundred scientific publications. In addition to his research work, Prof. Guler has extensive practical experience, including design work for numerous projects where geosynthetics were used as reinforcement or liners.
Dr. Giroud, Chevalier in the Order of the Légion d’Honneur and a former professor of geotechnical engineering, is a consulting engineer, member of the US National Academy of Engineering, Doctor Honoris Causa of the Technical University of Bucharest, Past President of the International Geosynthetics Society (IGS), Chairman Emeritus and founder of Geosyntec Consultants, and Chairman of the Editorial Board of Geosynthetics International. Dr. Giroud has authored over 400 publications. He coined the terms “geotextile” and “geomembrane” in 1977. He has developed many of the design methods used in geosynthetics engineering and has originated a number of geosynthetics applications. In 1994, the IGS named its highest award “The Giroud Lecture”, “in recognition of the invaluable contributions of Dr. J.P. Giroud to the technical advancement of the geosynthetics discipline”; a Giroud Lecture is presented at the opening of each International Conference on Geosynthetics. In 2002, Dr. Giroud became Honorary Member of the IGS with the citation “Dr. Giroud is truly the father of the International Geosynthetics Society and the geosynthetics discipline”. In 2005, Dr. Giroud has been awarded the status of “hero” of the Geo-Institute of the American Society of Civil Engineers (ASCE) and has delivered the prestigious Vienna Terzaghi Lecture. In 2005-2006 he presented the Mercer Lectures, a prestigious lecture series endorsed jointly by the IGS and the International Society for Soil Mechanics and Geotechnical Engineering (ISSMGE). In 2008, J.P. Giroud delivered the prestigious Terzaghi Lecture of the ASCE. In 2016, Dr. Giroud delivered the prestigious Victor de Mello Lecture of the ISSMGE and, in 2017, the prestigious Széchy Lecture, in Budapest. Dr. Giroud has 56 years of experience in geotechnical engineering, including 48 years on geosynthetics.