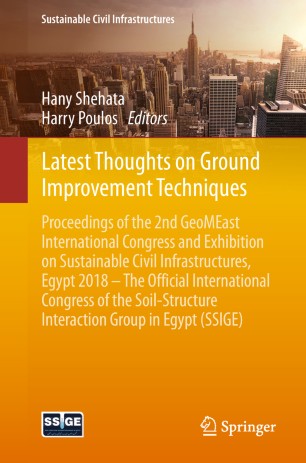 The volume contains research studies that cover a wide range of topics related to ground improvement and subsurface structures. This selection of papers represents the state-of-the-art in the analysis and design of different techniques of the ground improvement and deep mixing techniques. It provides engineers and researchers with an update on the recent development in ground improvement techniques and on the analysis and design of important soil structures problems. The volume is based on the best contributions to the 2nd GeoMEast International Congress and Exhibition on Sustainable Civil Infrastructures, Egypt 2018 – The official international congress of the Soil-Structure Interaction Group in Egypt (SSIGE).

Dr. Hany F. Shehata is the founder and CEO of the Soil-Structure Interaction Group in Egypt “SSIGE.” He is a partner and vice-president of EHE-Consulting Group in the Middle East, and managing editor of the “Innovative Infrastructure Solutions” journal, published by Springer. He worked in the field of civil engineering early, while studying, with Bechtel Egypt Contracting & PM Company, LLC. His professional experience includes working in culverts, small tunnels, pipe installation, earth reinforcement, soil stabilization, and small bridges. He also has been involved in teaching, research, and consulting. His areas of specialization include static and dynamic soil-structure interactions involving buildings, roads, water structures, retaining walls, earth reinforcement, and bridges, as well as, different disciplines of project management and contract administration. He is the author of an Arabic practical book titled “Practical Solutions for Different Geotechnical Works: The Practical Engineers’ Guidelines.” He is currently working on a new book titled “Soil-Foundation-Superstructure Interaction: Structural Integration”. He is the contributor of more than 50 publications in national and international conferences and journals. He served as a co-chair of the GeoChina 2016 International Conference in Shandong, China. He serves also as a co-chair and secretary general of the GeoMEast 2017 International Conference in Sharm El-Sheikh, Egypt. 2016 Outstanding reviewer of the ASCE as selected by the Editorial Board of International Journal of Geomechanics.
Professor Harry Poulos' pioneering work in pile foundation analysis and design has enabled the world's geotechnical specialists to have a greater understanding of the way structures interact with the ground. His research has enabled a more reliable approach to be adopted for pile design, replacing procedures which previously relied purely on experience and empiricism.

Professor Poulos has applied his research to a wide range of major projects, both in Australia and overseas, including buildings, bridges, tunnels, freeways, mines, airports offshore structures (e.g. oil rigs) and earthquake-related problems. Professor Poulos' work includes the Emirates Twin Towers in Dubai, where his analysis and design of the piled raft foundations provided significant cost benefits for the twin towers exceeding 300 metres in height, the Burj Khalifa, now the world's tallest building, where he was the geotechnical peer reviewer, the Docklands project in Melbourne involving design of remedial pile foundations for one of the high rise residential developments, and the construction of a 700km long motorway in Greece using his expertise in slope stabilisation and earthquake engineering.
While retaining his professorial position at the University of Sydney, Professor Poulos joined the Coffey Group in 1989, as the Director of Advanced Technology, and became Chairman of Coffey International Pty Ltd in 1991, a position that he held for two years. In the period 1998 to 2002 he served as Director of Technical Innovation and General Manager, Technical Development.
Professor Poulos has long been a contributor to the activities of the international geotechnical community. He was also a long-term member of the National Committee of the Australian Geomechanics Society (AGS) (1980 to 1995) and its Chairman from 1982 to 1984. He was Committee Member of the AGS Sydney Group, 1971-76, 1979-2002, Vice-chairman 1974 and Chairman 1980-81. He was the Australasian Vice-President of the International Society for Soil Mechanics and Foundation Engineering in the period 1989-1994, an appointed Board Member of the Society from 2001 to 2005, and is currently the Chair of the Membership, Practitioner and Academic Committee of the Society.
He was recognised by his peers for his contributions to Australian Geomechanics by the Sydney Chapter via the institution of the annual Poulos Lecture in 2002.
Professor Poulos is a recipient of many prizes and awards, including Australia's Centenary Medal (2003) for his services to Australian society and science in the field of geotechnical engineering. His overall contribution to the engineering profession has been recognised formally by the award of Member of the Order of Australia (1993), his election as Fellow of the Australian Academy of Science (1988), his Fellowship of the Australian Academy of Technological Sciences and Engineering (1996), his Honorary Fellowship of the Institution of Engineers Australia (1999), the award of the Warren Prize (1972) and Warren Medal (1985) of the Institution of Engineers, Australia, his selection as the 2003 Australian Civil Engineer of the year, and his selection in 2004 as the inaugural Geotechnical Practitioner of the year.
Professor Poulos gave the prestigious Rankine Lecture of the Institution of Civil Engineers (UK) in 1989, and was invited by the American Society of Civil Engineers (ASCE) to deliver the annual Terzaghi lecture in 2004. He also received from ASCE the 1972 Croes medal, the 1995 State of the Art Award, and the 2007 Middlebrooks Award. In 2010, he was elected as a Distinguished Member of ASCE, the first Australian Civil Engineer to be so recognised.