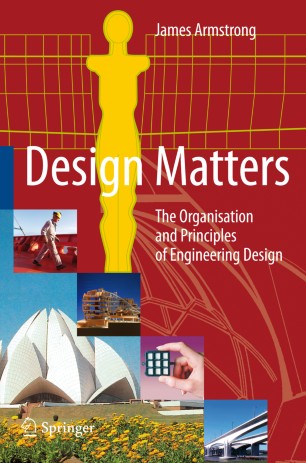 The Organisation and Principles of Engineering Design

Design is the essential component of engineering. Design Matters demonstrates the need to understand the context, process and delivery of engineering projects and services by focusing on the nature and practice of engineering design. The book specifically highlights the cultural, economic, political and social parameters and illustrates the importance of their understanding as demonstrated by successful designers.

Unique to Design Matters are case studies that demonstrate the principles described in the book and the importance of using multidisciplinary teams to achieve effective design development. Contributions are included from key professionals involved in several high-profile and innovative civil and industrial engineering projects, including:

Design Matters is an ideal text for graduate students in all branches of engineering looking to gain a practical introduction to the breadth and depth of the design process as well as to practicing engineers who wish to gain further insight into how design engineering works strategically.

James Armstrong is an internationally-known consulting engineer, a Fellow of the Royal Academy of Engineering and a past president of the Institution of Structural Engineers. He was responsible for the design and planning of such world-class projects as the Channel Tunnel Terminal works, the Falkland Islands airport and the University of Surrey, UK. In academia he has taught as a visiting professor at universities in the UK, United States, South Africa, Australia and New Zealand. He has travelled and lectured widely, in Russia, Romania, Brazil, India, Nepal, Sri Lanka, Singapore and Hong Kong.

Jim, who joined BDP in 1963, was appointed Partner in 1967 and was head of the civil and structural engineering profession at BDP until his retirement in 1989.

He had a major influence on a wide spectrum of the firm’s affairs ranging from a deeply felt involvement with education and professional development to high profile engineering projects such as his early involvement in the UK Channel Tunnel Terminal.

He brought to all issues a directness of approach and made a significant contribution to the wider engineering profession not least in the year spent as President of the Institution of Structural Engineers (1989-90).

In his life after BDP he continued to travel and lecture widely and was author of numerous publications, with one book entitled Design Matters: the organisation and principles of engineering design published as recently as 2008.

As said of Jim at the time of his retirement from BDP “only those who have known him can have a real understanding of the value of his work and the care and thought he has given to further our aims and strengthen our successes.” This was Jim through and through.