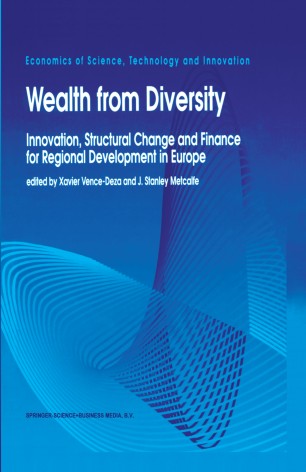 Innovation, Structural Change and Finance for Regional Development in Europe

Part of the Economics of Science, Technology and Innovation book series (ESTI, volume 9)

x. Vence-Deza & J.S. Metcalfe U. of Santiago de Compostela & U. of Manchester This book contains selected papers presented at the International Congress "European Periphery Facing the New Century" held in Santiago de Compostela, Galicia, at the end of 1993. The general aim of this congress was to rethink the great economic and social changes in Europe during the last decade from a critical view, specially focused on peripheral regions and the conditions for an enduring process of development. Both economic, social and political changes affect the characteristic diversity of Europe and they have a special impact on the countries and regions that were traditionally known as the periphery within Western Europe. The list of concerns is long: regions with different levels of development compete within a new single market; the free movement of productive factors modifies the traditional pattern of industrial location, increasing tendencies to regional concentration shift the balance of income generation; new competitors enter traditional markets; information technology creates new possibilities of industrial organization and cooperation; competitivity is based on different capabilities to innovate and to promote structural change, and these capabilities differ among regions; traditional regional policies fail in the present even more than in the past. Hence the central concern of this volume, to explore the links between diversity and regional development.