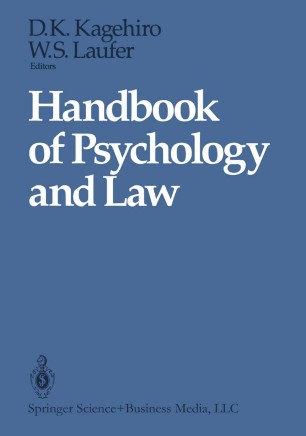 Handbook of Psychology and Law

Shari Seidman Diamond Scholars interested in psychology and law are fond of c1aiming origins for psycholegal research that date back four score and three years ago to Hugo von Munsterberg's On the Witness Stand, published in 1908. These early roots can mislead the casual observer about the history of psychology and law. Vigorous and sustained research in the field is a recent phenomenon. It is only 15 years since the first review of psy­ chology and law appeared in the Annual Review of Psychology (Tapp, 1976). The following year saw the first issue of Law and Human Behavior, the official publication of the American Psychology-Law Society and now the journal of the American Psychological Associ­ ation's Division of Psychology and Law. Few psychology departments offered even a single course in psychology and law before 1973, while by 1982 1/4 of psychology graduate programs had at least one course, and a number had begun to offer forensic minors and/or joint J. D. / Ph. D. programs (Freeman & Roesch, see Chapter 28). Yet this short period of less than 20 years has seen a dramatic level of activity. Its strengths and weaknesses, excitements and disappointments, are aII captured in the collection of chapters published in this first Handbook of Psychology and Law. In describing what we have learned ab out psychology and law, the works included here also reveal the questions we have yet to answer and thus offer a blueprint for activities in the next 20 years.