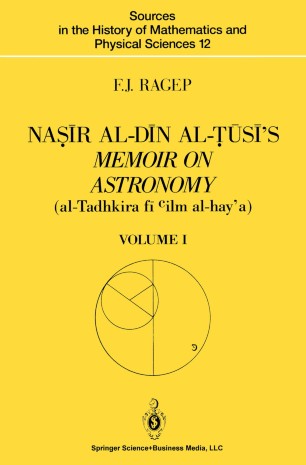 Volume I: Introduction, Edition, and Translation

Part of the Sources in the History of Mathematics and Physical Sciences book series (SOURCES, volume 12)

I was introduced to Tiisi: and his Tadhkira some 19 years ago. That first meeting was neither happy nor auspicious. My graduate student notes from the time indicate a certain level of confusion and frustration; I seem to have had trouble with such words as tadwlr (epicycle), which was not to be found in my standard dictionary, and with the concept of solid-sphere astronomy, which, when found, was pooh-poohed in the standard sources. I had another, even more decisive reaction: boredom. Only the end of the term brought relief, and I was grateful to be on to other, more exciting aspects of the history of science. A few years later, I found myself, thanks to fellowships from Fulbright-Hays and the American Research Center in Egypt, happily immersed in the manu­ script collections of Damascus, Aleppo, and Cairo. Though I had intended to work on a topic in the history of mathematics, I was drawn, perhaps inevitably, to a certain type of astronomical writing falling under the rubric of hay' a. At first this fascination was based on sheer numbers; that so many medieval scientists could have written on such a subject must mean something, I told myself. (I was in a sociological mode at the time.