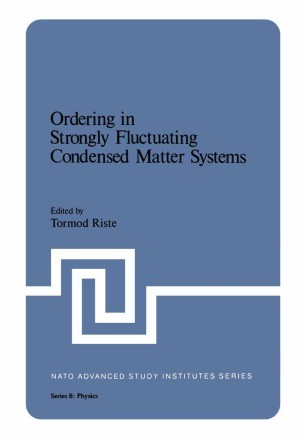 This NATO Advanced Study Institute held at Gei10, Norway, April 16th-27th 1979, was the fifth in a series devoted to the subject of phase transitions and instabilities. The application to NATO for the funding of this ASI contained the following para­ graphs: "Traditionally one has made a clear distinction between solids and liquids in terms of positional order, one being long-ranged and the other at most short-ranged. In recent years experiments have revealed a much more faceted picture and a less sharp distinction between solids and liquids. As an example one now has 3-dimensiona1 (3-D) liquids with 1-D density waves and 3-D solids with 1-D-1iquid molecular chains. The subsystems have the common feature of 10w­ dimensional systems: a strong tendency for fluctuations to appear. Although the connection between fluctuations and dimensionality, and the suppression of long-range order by fluctuations, was pointed out as early as 1935 by Peier1s and by Landau, it is in the last five years or so that theoretical work has gained momentum. This development of understanding started ten years ago, however, much inspired by the experimental work on 2-D spin systems.