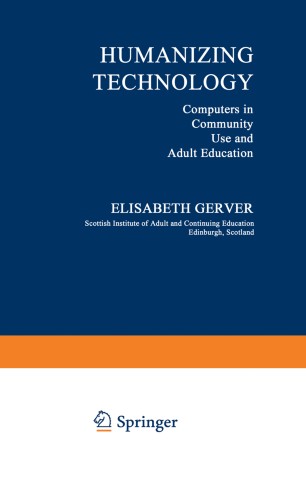 Computers in Community Use and Adult Education

A few years ago, a book of this type and style could not or would not have been written. This is because, until a few years ago, no real in-depth knowl­ edge of computers and computerized equipment was at the disposal of those with a nonscience, nonquantitative background. Some people from other disciplines-including business, the arts, and the social sciences-had been working with such equipment, but they had "gone over" and tended to be even more computer-conscious than those whom they served. It is only comparatively recently that people like Elisabeth Gerver with a firm arts and adult education background first of all became knowledgeable and then remained true to that background. To her eternal credit, Elisabeth Gerver, when she became involved, avoided being sucked into the world of the jargon or even that of the thinking of the computer scientists and the electronic engineers. On the contrary, she insisted that she was an educated woman dealing with other educated people, and that they would all speak in the language of everyday discourse. It worked! One consequence of her experience and her thought is this remarkably lucid and readable book. It will prove to be of immense value to many in the world of adult and community education. But the beneficiaries will run beyond those sectors of society. Other people with a nonscience, nonquantitative background will surely find it of immense value in their early, inevitably hesitant and faulty, grappling with the world of new technology.