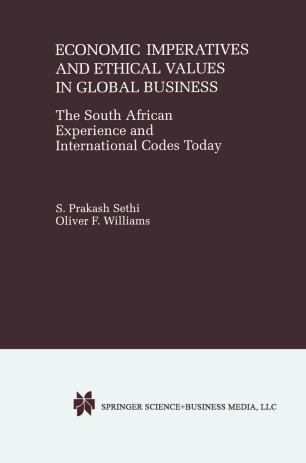 religious values at the office door. Apartheid was an evil, and business had great power in South Africa. Where there is power, there is also responsibil­ ity. I prayed about this long and hard. I pushed the companies as much as I thought I could. There were advances and there were setbacks, but finally we prevailed and the Blacks of South Africa secured their freedom. My effort in behalf of the Sullivan Principles was only one of a number of significant efforts of the anti-apartheid movement. All of those other efforts must be recognized, as well. The Sullivan Principles and the manner in which they were implemented in South Africa were in the nature of a grand experiment in the sociopolitical change and economic uplifting of the Black people of South Africa. What is even more important is that the Principles were driven by an ethical and moral imperative, and were voluntarily implemented by a group of enlight­ ened United States multinational corporations. No grand design or vision is ever perfect. We fall prey to human follies, limited understanding of the future, and necessary compromises to seek not what is perfect but what is possible. Thus, any such effort is subject to criticism from those who seek ideological purity and those who seek to minimize the impact of change from the status quo . .

`S. Prakash Sethi and Oliver F. William's book on the antiapartheid movement and the birth and gradual modification of the Sullivan Principles is a monumental achievement. Sethi and Williams have spent more than 20 years in and out of South Africa, interacting with business leaders, union officials, lawmakers and government functionaries, researching the issues, interviewing the primary actors, consulting with ethicists, and spending endless hours with critics and apologists alike. ... Though this is an expensive book, it is a funcamental resource and belongs on the shelves of seminary and university libraries, in ecumenical, denominational and world mission offices, and in the hands of those who would be informed about one of the most important global-justice issues of the 21st century.'
James Armstrong in Christian Century, Januari 17, 2001