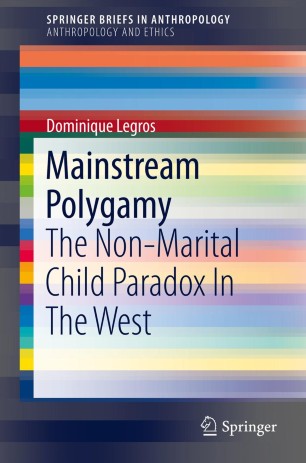 The Non-Marital Child Paradox In The West

Part of the SpringerBriefs in Anthropology book series (BRIEFSANTHRO, volume 2)

This volume explores the forms of knowledge generated by exoticizing the subject studied. It analyzes monogamy in Western cultures from a cultural distance. First, from the cultural perspective of a Kenyan writer who underlines the moral evils unwittingly generated by a system imposing universal monogamy and generating annual cohorts of illegitimate children. Then, the essay considers the case of France, which, starting in the 1970’s, changed its laws regarding children born out of wedlock. Such children have now become legitimate. Unwittingly, this has allowed for polygyny or polyandry to become legal options for French males and females. The analysis is further extended to Western Europe, two Latin American nations and to the contemporary U.S.A. with its polyamory movement, where legal outcomes similar to those of France have occurred.

The volume examines monogamy by using the epistemological approach that is typically used in the anthropological study of cultures other than one’s own, showing how exotic and strange the system of monogamy can look, when observed from afar, from the eyes of many non-Westerners. It gives insight into planes of the human Western experience that would normally remain invisible. Students and teachers will delight in the close-to-home debates stimulated by this evocative thought-provoking essay.

Dominique Legros is a professor of anthropology emeritus at Concordia University in Montreal, Canada. He graduated from the University of Paris X (M.A.) and from the University of British Columbia, Canada (Ph.D.). Since 1972, he has conducted extensive fieldwork in the Yukon Territory among the Northern Tutchone Athapaskan Indians. He is the author numerous articles and of several books; among them Tommy McGinty's Northern Tutchone Story of Crow: A First Nation Elder Recounts the Creation of the World. Canadian Museum of Civilisation; Oral History as History: Tutchone Athapaskan in the Period 1840-1920. Hudę Hudän Series, Yukon History No. 3. Yukon, 2 vols. He has been a president of the Canadian Anthropology Society.