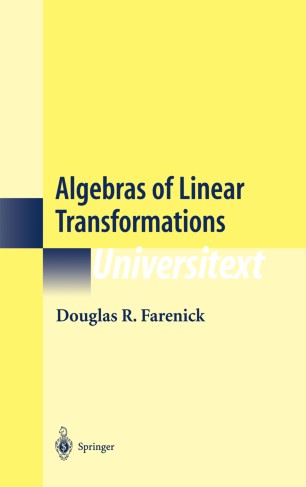 The aim of this book is twofold: (i) to give an exposition of the basic theory of finite-dimensional algebras at a levelthat isappropriate for senior undergraduate and first-year graduate students, and (ii) to provide the mathematical foundation needed to prepare the reader for the advanced study of anyone of several fields of mathematics. The subject under study is by no means new-indeed it is classical­ yet a book that offers a straightforward and concrete treatment of this theory seems justified for several reasons. First, algebras and linear trans­ formations in one guise or another are standard features of various parts of modern mathematics. These include well-entrenched fields such as repre­ sentation theory, as well as newer ones such as quantum groups. Second, a study ofthe elementary theory offinite-dimensional algebras is particularly useful in motivating and casting light upon more sophisticated topics such as module theory and operator algebras. Indeed, the reader who acquires a good understanding of the basic theory of algebras is wellpositioned to ap­ preciate results in operator algebras, representation theory, and ring theory. In return for their efforts, readers are rewarded by the results themselves, several of which are fundamental theorems of striking elegance.