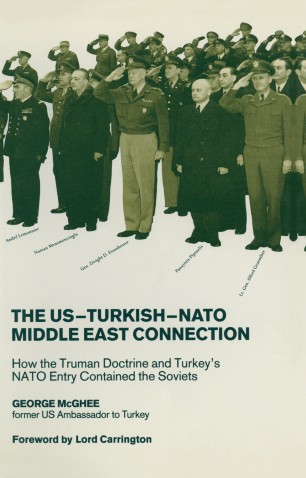 How the Truman Doctrine Contained the Soviets in the Middle East

This book describes the historical background of the Middle East and, in particular, Turkey, prior to the end of World War II. It takes up the various steps taken by the United States to combat Soviet moves after the war to take over this strategic area. It describes the inception of the Truman Doctrine to rearm and strengthen Greece and Turkey in the face of British withdrawal, the unsuccessful efforts made by the United States and Britain to establish a Middle East command or defense organisation, and the successful U.S. efforts to get Turkey into NATO, which blocked Soviet entry. '...Ambassador McGhee has chronicled the events which led to Turkey's accession to NATO with great clarity and in a most interesting and readable fashion. He throws a fascinating light on the relationship between the United States of America and Turkey and the personalities involved. This book not only deserves to be read, but it deserves study by all of those who are interested in Defence and Foreign Affairs.' Lord Carrington

PATRICK McGHEE is Dean of Cultural, Legal and Social Studies at the University of Central Lancashire.