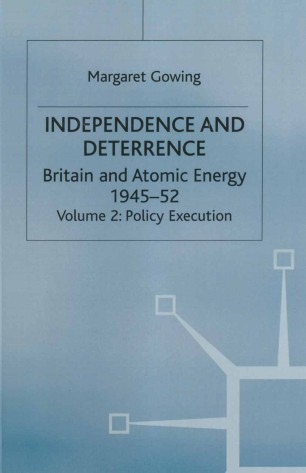 Independence and Deterrence , commissioned by the United Kingdom Atomic Energy Authority, continues the story of Britain's atomic project begun in Britain and Atomic Energy 1939-1945 , and covers the years from 1945 to the first British bomb test at the end of 1952. Volume 1 studies policy making at the highest levels - the strategic, political and international considerations, the administrative and constitutional machinery. It shows how and why Britain decided to make atomic bombs and follows traumatic negotiations for Anglo-American atomic collaboration and their effect on Britain's relations with Europe and the Commonwealth. There is important material on Anglo-Canadian affairs. The book sheds new light on Britain's rights to consultation on any American use of atmoic bombs. Volume 2 studies the execution of the project. It analyses the cost of the project in money and manpower, the problems of health and safety, secrecy and security, the relationship between government and private industry. Above all it gives a 'nuts and bolts' description of the work of the scientists and engineers in carrying out - with great success - a complex technological project operating on the furthest frontiers of knowledge, which culminated in making and testing the Mark I weapon. There is an illuminating chapter on the origins of Britian's nuclear power programme and her choice of reactor. These chapters emphasise not only ecomomic, managerial and technological aspects, but also the great influence of personalities. This is the first peacetime official history to be authorised for publication. It has been written with free access to official documents and very little has been modified or omitted on public interest grounds. Most of the material is completely new. Ronald Clark wrote of Britain and Atomic Energy , '[Mrs Gowning] has been able to let cats out of bags by the litterful'. This is even more true of Independence and Deterrence.

MARGARET GOWING is Professor of the History of Science, University of Oxford, and Fellow of Linacre College. She is joint author of two books in the civil series of United Kingdom official war histories - British War Economy (with Sir Keith Hancock) and Civil Industry and Trade (with E. L. Hargreaves) - and author of Britain and Atomic Energy, 1939-1945.

LORNA ARNOLD is Departmental Record Officer at the United Kingdom Atomic Energy Authority and assistant to the official historian.