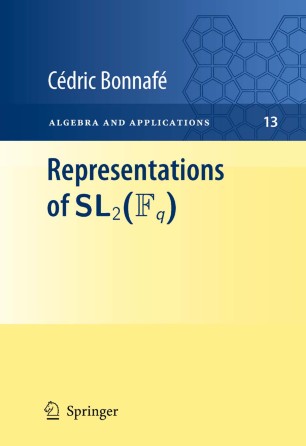 Part of the Algebra and Applications book series (AA, volume 13)

Deligne-Lusztig theory aims to study representations of finite reductive groups by means of geometric methods, and particularly l-adic cohomology. Many excellent texts present, with different goals and perspectives, this theory in the general setting. This book focuses on the smallest non-trivial example, namely the group SL2(Fq), which not only provide the simplicity required for a complete description of the theory, but also the richness needed for illustrating the most delicate aspects.

The development of Deligne-Lusztig theory was inspired by Drinfeld's example in 1974, and Representations of SL2(Fq) is based upon this example, and extends it to modular representation theory. To this end, the author makes use of fundamental results of l-adic cohomology. In order to efficiently use this machinery, a precise study of the geometric properties of the action of SL2(Fq) on the Drinfeld curve is conducted, with particular attention to the construction of quotients by various finite groups.

At the end of the text, a succinct overview (without proof) of Deligne-Lusztig theory is given, as well as links to examples demonstrated in the text. With the provision of both a gentle introduction and several recent materials (for instance, Rouquier's theorem on derived equivalences of geometric nature), this book will be of use to graduate and postgraduate students, as well as researchers and lecturers with an interest in Deligne-Lusztig theory.