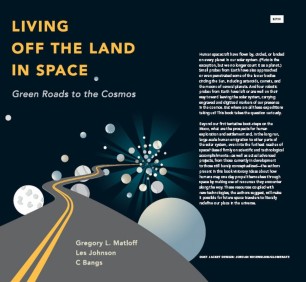 Living Off the Land in Space

Green Roads to the Cosmos

A number of new space-propulsion technologies- including the solar sail, the solar-electric rocket, solar-thermal propulsion, aerocapture, tethers and advanced chemical propulsion- are becoming operational or are in an advanced state of development. This book draws parallels with the settlement of terrestrial frontiers to investigate how new space propulsion techniques may help future space settlers exploit extraterrestrial resources to establish independence from the Earth.

"Living Off the Land in Space," a collaboration among two space scientists and an artist, is illuminated with many NASA-derived computer-generated images, including drawings, and presents the human (as well as the technological) side of space settlement. It will be an inspiring and indispensible source for those wishing to share in this great adventure.