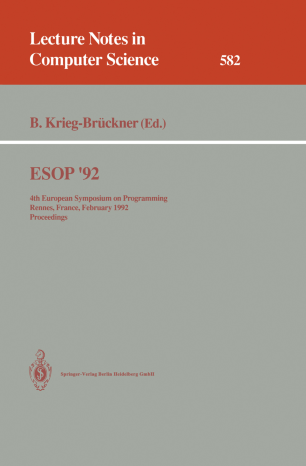 This volume contains selected papers presented at the seventeenth Colloquiumon Trees in Algebra and Programming (CAAP) held jointly with the European Symposium on Programming (ESOP) in Rennes, France, February 26-28, 1992 (the proceedings of ESOP appear in LNCS 582). The previous colloquia were held in France, Italy, Germany, Spain, Denmark and England. Every even year, as in 1992, CAAP is held jointly with ESOP; every other year, it is part of TAPSOFT (Theory And Practice of SOFTware development). In the beginning, CAAP was devoted to algebraic and combinatorial properties of trees and their role in various fields of computer science. The scope of CAAP has now been extended to other discrete structures, like graphs, equations and transformations of graphs, and their links with logical theories. The programme committee received 40 submissions, from which 19 papers have been selected for inclusion inthis volume.