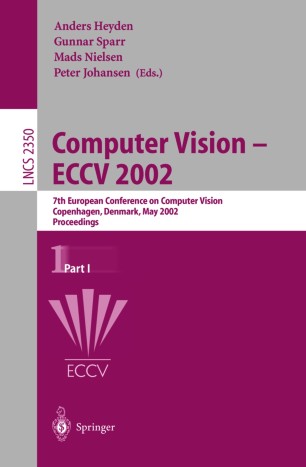 Premiering in 1990 in Antibes, France, the European Conference on Computer Vision, ECCV, has been held biennially at venues all around Europe. These conferences have been very successful, making ECCV a major event to the computer vision community. ECCV 2002 was the seventh in the series. The privilege of organizing it was shared by three universities: The IT University of Copenhagen, the University of Copenhagen, and Lund University, with the conference venue in Copenhagen. These universities lie ¨ geographically close in the vivid Oresund region, which lies partly in Denmark and partly in Sweden, with the newly built bridge (opened summer 2000) crossing the sound that formerly divided the countries. We are very happy to report that this year’s conference attracted more papers than ever before, with around 600 submissions. Still, together with the conference board, we decided to keep the tradition of holding ECCV as a single track conference. Each paper was anonymously refereed by three different reviewers. For the ?nal selection, for the ?rst time for ECCV, a system with area chairs was used. These met with the program chairsinLundfortwodaysinFebruary2002toselectwhatbecame45oralpresentations and 181 posters.Also at this meeting the selection was made without knowledge of the authors’identity.