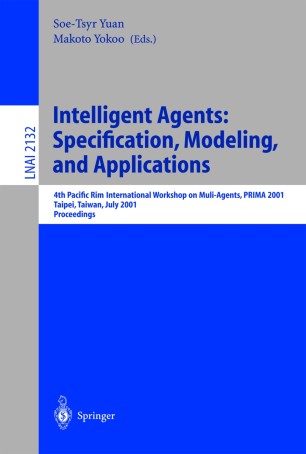 The increasing importance of intelligent agents and their impact on industry/business worldwide is well documented through academic research papers and industrial reports. There is a strong affinity between the Web a worldwide distributed computing environment and the capability of intelligent agents to act on and through software. The ultimate goal of intelligent agents is to accelerate the evolution of the Web from a passive, static medium to a tuned, highly valued environment. This volume contains selected papers from PRIMA 2001, the fourth Pacific Rim International Workshop on Multi-Agents, held in Taipei, Taiwan, July 28-29, 2001. In this volume, the papers cover specification, modeling, and applications of intelligent agents. PRIMA is a series of workshops on autonomous agents and multi-agent systems, integrating the activities in Asia and the Pacific Rim countries. PRIMA 2001 built on the great success of its predecessors, PRIMA98 i n Singapore, PRIMA99 i n Kyoto, Japan, and PRIMA 2000 in Melbourne, Australia. The aim of PRIMA 2001 was to bring together researchers from Asia and the Pacific Rim and developers from academia and industry to report on the latest technical advances or domain applications and to discuss and explore scientific and practical problems as raised by the participants.