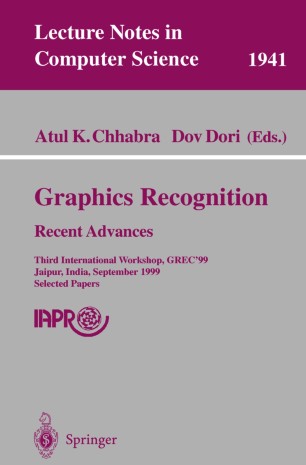 This edited volume contains refereed and improved versions of select papers 1 that were presented at the third IAPR Workshop on Graphics Recognition (GREC’99), held at Rambagh Palace in Jaipur, India, 26–27, September 1999. The workshop was organized by the TC10 (Technical Committee on Graphics Recognition) of the IAPR. Edited volumes from the previous two workshops in this series are also available as Lecture Notes in Computer Science (volumes 1072 and 1389). Graphics recognition is the study of techniques for computer interpretation of images of line drawings and symbols. This includes methods such as vectori- tion, symbol recognition, and table and chart recognition for applications such as engineering drawings, schematics, logic drawings, maps, diagrams, and musical scores. Some recently developed techniques include graphics-based information or drawing retrieval and recognition of online graphical strokes. With the recent advances in the ?eld, there is now a need to develop benchmarks for evaluating and comparing algorithms and systems. Graphics recognition is a growing ?eld of interest in the broader document image recognition community. The GREC’99 workshop was attended by ?fty-?ve people from ?fteen co- tries. The workshop program consisted of six technical sessions. Each session began with a half-hour invited talk which was followed by several short talks. Each session closed with a half-hour panel discussion where the authors ?elded questions from the other participants. Several interesting new research directions were discussed at the workshop.