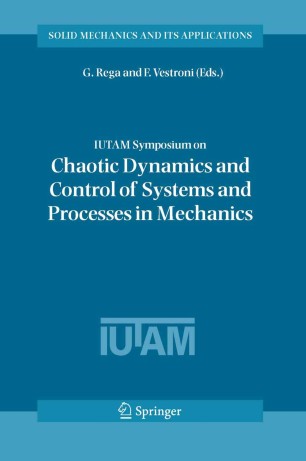 Proceedings of the IUTAM Symposium held in Rome, Italy, 8–13 June 2003

Part of the Solid Mechanics and its Applications book series (SMIA, volume 122)

The interest of the applied mechanics community in chaotic dynamics of engineering systems has exploded in the last fifteen years, although research activity on nonlinear dynamical problems in mechanics started well before the end of the Eighties. It developed first within the general context of the classical theory of nonlinear oscillations, or nonlinear vibrations, and of the relevant engineering applications. This was an extremely fertile field in terms of formulation of mechanical and mathematical models, of development of powerful analytical techniques, and of understanding of a number of basic nonlinear phenomena. At about the same time, meaningful theoretical results highlighting new solution methods and new or complex phenomena in the dynamics of deterministic systems were obtained within dynamical systems theory by means of sophisticated geometrical and computational techniques. In recent years, careful experimental studies have been made to establish the actual occurrence and observability of the predicted dynamic phenomena, as it is vitally needed in all engineering fields. Complex dynamics have been shown to characterize the behaviour of a great number of nonlinear mechanical systems, ranging from aerospace engineering applications to naval applications, mechanical engineering, structural engineering, robotics and biomechanics, and other areas. The International Union of Theoretical and Applied Mechanics grasped the importance of such complex phenomena in the Eighties, when the first IUTAM Symposium devoted to the general topic of nonlinear and chaotic dynamics in applied mechanics and engineering was held in Stuttgart (1989).